As of March 18, all American River College facilities are closed, and all classes and student services are being offered remotely (to the extent possible). Please disregard any on-campus hours posted on this website until further notice. Learn more about remote operations and online services. 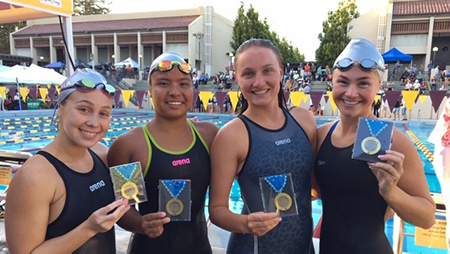 American River College (ARC) Beaver athletics finished the 2018-19 academic year ranked 5th in the state of California for overall excellence among community college sports programs. The recognition comes from the National Alliance of Two-Year College Athletic Administrators, which awards points to all 108 schools in the California Community College Athletic Association based on their team's final positions in post-conference competition.

This continues a trend of success for ARC. The college has finished in the top ten for over a decade. ARC was ranked third in the state in 2014-15 and 2013-14.

"This statewide recognition is satisfying because ARC is very proud of all of its student athletes who work hard year-round to excel," said Derrick Booth, ARC Dean of Athletics. "A lot of credit goes to the coaches and staff who put their heart and soul into seeing their players succeed. California community colleges have some powerful athletic programs. To be among the top in the state is testimony to the efforts of every member of the Beaver family"

Booth noted that, while athletic success is important, winning in the classroom is mission #1 with ARC.

"While we applaud every student athlete's success on the field, we are even prouder of them when they shine in their studies," Booth said. "They are building a foundation for their future with the discipline and diligence they apply to their work in the classroom – and on the field."

A key component of ARC's student success strategy is the Dusty Baker Student Athlete Center. The center provides a "one stop shop" of resources for student athletes, including academic counseling, workshops, referrals to other campus services, and much more.

"I commend the great work done by our Dusty Baker Center staff and our athletic training room staff. It takes a team to support student success and we have a great team in place," Booth said.

The National Alliance of Two-Year College Athletic Administrators (NATYCAA) is the professional organization of U.S. two-year college athletic administrators. The NATYCAA Awards were designed to recognize and reward overall program excellence at the two-year college level. This is the 15th year that NATYCAA has sponsored a State Association's division.